I wish to god this title had just been set in some medieval or Renaissance-inspired fictional universe, like Akagami no Shirayuki-hime, rather than given us a specific time and place, because doing so immediately draws attention to everything that’s not historically accurate about it. Which is… well, pretty much everything.

Look, when watching historical anime set outside Japan that takes place any time before, say, the 1900s, I’m typically prepared for the laughably off-base clothing or the still-distinctly Japanese mannerisms – it’s not as though I expect an anime series to do the same amount of research or have the same kind of resources as someone in charge of a live-action historical drama. But when the whole damn premise is this blatantly exaggerated (while still an unconventional role for an aristocratic woman, there were in fact a number of female artists in the Renaissance period – famously so, actually – and you’d think even an anime studio would be capable of doing a quick Wikipedia search on the topic), I just can’t bring myself to take the show even the slightest bit seriously. 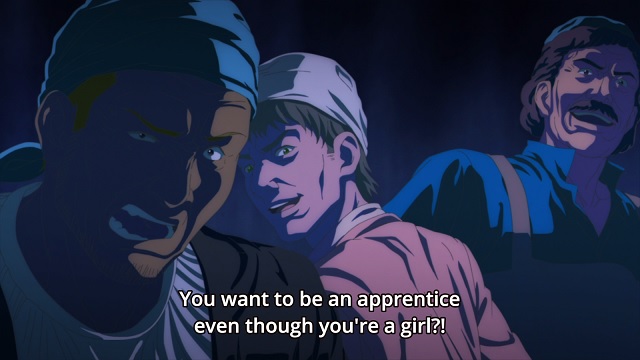 Fetch me my fainting couch.

For some viewers, this might be tolerable – maybe I’m just too fond of well-researched historical fiction novels, or maybe I’m just too picky in general. But even assuming that’s so, the rest of the premiere doesn’t exactly fill me with excitement. I mean, it’s… fine. It’s just fine. You have the spunky female lead who, with hard work of course, will eventually prove to everyone that women can do anything, even (gasp) paint for a living. Enter the gruffly cynical older male teacher figure with a secret heart of gold who’ll intentionally set (nearly) impossible tasks, yet also eventually be struck by his apprentice’s instinctual talent and creative purity. On the sidelines stand the family naysayers who are just shocked, shocked I tell you, by this unseemly flouting of tradition. To me, it honestly feels like the story could’ve been written by a bot, but hey, I’m sure there’s an audience for that.

I don’t know, you might enjoy this if you’re after something that’s guaranteed to be inoffensive and won’t take much energy to watch. I don’t want to be too down on it, because it’s not as though I can morally object to something that’s just kind of there and is mildly pretty to look at. For me personally though, it’s a total snooze-fest.