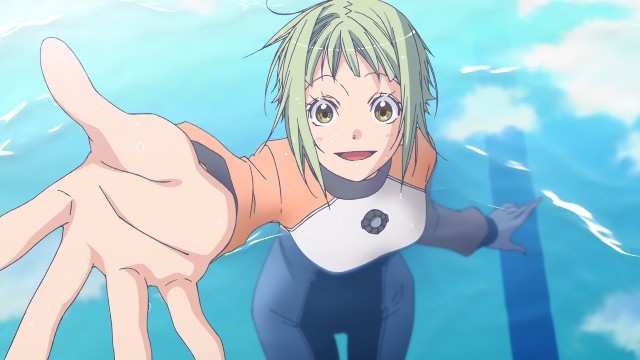 For whatever reason, this one completely passed me by when it aired last summer. But after much urging from fellow Glorio blogger Iro, I finally got around to watching it over the past couple of weeks.

Actually that’s a lie; it took me a couple of months to watch the whole thing. Because let’s get one thing clear, Amanchu! is a sloooow burn, even for a slice-of-life/iyashikei show. It’s entirely character-driven, with no plot at all to speak of beyond a small handful of high school students in the scuba diving club hanging out and discovering the joys of hanging out even more underwater. On paper, not exactly riveting stuff, although on screen it’s… well, still not exactly riveting stuff, but also a lot more sensitive and even insightful than you might think. I’m inclined to put that down as a good thing when all’s said and done, but it doesn’t change the fact that Amanchu! just isn’t a particularly exciting watch; I like slice-of-life titles and purposefully deliberate pacing, but there’s a reason it took me so long to get through a 12-episode series. Pleasant though it is, some things just aren’t meant to be marathoned, and doing so here would’ve likely sent me straight to sleep.

Luckily, it’s indeed the characters of Amanchu! that shine, making the protracted nature of the show worth it for anyone with the patience to see it through. Futaba and Hikari may seem an odd match at first, but the former’s natural introversion (and implied anxiety issues) and the latter’s eccentric, happy-go-lucky persona (seriously, I have to wonder whether Amanchu! is also going for a genuine depiction of non-specified autism here) is not only unique but weirdly fitting. Futaba lacks self-confidence but is very aware of this and strives to change, and Hikari is about as impulsive and off-the-wall as they come yet can be extremely intuitive, especially when it comes to Futaba. The pair of siblings who appear nearer the middle of the series help with the aforementioned pacing problems, mostly because of the extra energy they bring to the piece, but even more impressive is Mato, the gang’s homeroom teacher and club supervisor. It’s not often we get a teacher in an anime centered around high school who’s a main character in their own right, and even less one that doesn’t play the role of comic relief. Beyond that, it’s refreshing to see any adult anime character, particularly a teacher, place less stock on rote learning and more on practical experience and self-discovery.

I’m also happy to note that despite Amachu!’s focus on scuba diving and the water in general, the characters still come with zero fanservice – something that strikes me as frankly remarkable given the potential for skimpy swimwear, sleazy camera angles, and creepy yuri-baiting; doubly so for anything targeting a shounen audience. The show doesn’t make any attempt to avoid portraying its characters as actual people, so seeing them and their body shapes in wetsuits and bikinis sometimes is par for the course, but none of this is forced and at no point is there anything that feels like it intentionally panders to a male audience. In fact, the one complaint I do have about the outfits is with regards to the school uniforms. It’s not so much a matter of it being unrealistic as much as it looks just plain silly, with awkwardly-shaped, underbust pinafore dresses that go down to the ankle. While the male uniforms are just like always and true to life, the female uniforms are for some reason a bizarre mix of Trainee Nun and Countryside Folk Picnic. In purple.

That aside, the character designs and artwork in general isn’t bad. The random chin lines that appear seemingly at random are a bit distracting, and Hikari’s fabulous facial expressions seem overdone – they’d be funnier and more effective if they were pulled out only every now and again as opposed to every couple of minutes – but the overall look is nice enough, fresh and bright without crowding out the characters themselves. It’s nice to see small details like changes in hairstyle too, and the water of course looks lovely. The animation on the whole is really only average, but it does the job perfectly adequately and is honestly better than I’d expect coming from a studio like J.C.Staff, which isn’t exactly known for its technical prowess. Meanwhile, the sound of the show likewise fits with the overall tone but isn’t anything especially outstanding. The OP certainly isn’t Sakamoto Maaya’s most memorable work and I’ve already forgotten what the ED sounds like at all, but it all corresponds well enough with the rest of the series.

Though Amanchu! isn’t among my favourite titles of 2016 now that I’ve finally seen the whole thing, I can’t say that I regret watching it. Viewers who prefer to take their anime slow or else are in the mood for something quietly comforting are in luck; both in terms of genre and pacing, it’ll probably appeal at least on some level to anyone who enjoys the likes of Aria and Flying Witch.

Question of the post: What did you think of Amanchu!? Too slow even for an episodic slice-of-life piece, or a perfect fit for its type?