While I never do my annual anime wrap-up around this time (I save that for spring, since there tend to be less ongoing shows and because, at least in my head, it makes way more sense to count anime by season rather than by year), I thought it might be fun to talk about some of the most popular anime of 2015 that I couldn’t bring myself to like.

See, although I don’t think my taste differs all that wildly from what the majority of other anime bloggers tend to label as ‘best’ and/or ‘trash’ (I’m just not alternative enough to be that cool, I guess), there are always at least a few titles released each year that a ton of people end up raving about, but that I just can’t seem to get into. This post is about them.

Oh, and I shouldn’t really need to point this out but just in case: I’m not bashing anyone else’s choices here. If you watched and liked any of these (and I’m guessing most readers did at least one), good for you. Incidentally, none of the below anime are what I’d call bad. In fact, they’re not even anime I hate – just anime I didn’t like. Big difference. 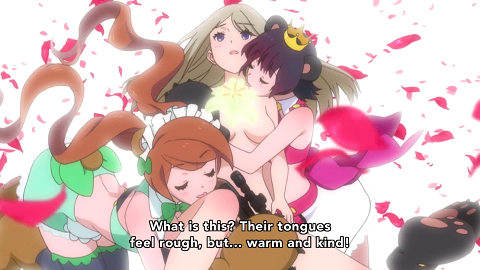 Okay, so I tried really, really hard to like a show about lesbian bears. Now there’s a sentence I never imagined I’d be saying before 2015. Truly though, I did give this one my best shot – I watched the whole series and strived valiantly to withhold my judgment until I’d finished up. But here’s the thing: I truly believe in my heart of hearts that if almost anyone aside from Ikuhara Kunihiko had been behind this series, a lot of those same people who loved it would have called it a travesty. I have absolutely nothing against perky breasts, copious amounts of nibbling/licking, and whatever other myriad of sexual imagery was involved in Yuri Kuma Arashi, but there were some pretty fundamental questions I was asking myself after the first few minutes of this. Chief among them: at what point does heavy symbolism become pretentious and/or nonsensical, and where do I want to draw the line between what I consider genuine social commentary and metaphors that exist solely for the sake of being seen as trippy or ‘highbrow’ entertainment? In both cases, Yuri Kuma Arashi fell on the wrong side of the argument as far as I was concerned. Did it look good doing so? Sure. Did it make me once or twice? Indeed it did. Did I find that ED sequence utterly adorable? Absolutely. Unfortunately, that’s where most of the positives ended for me.

I’ll admit right here that I watched… I think only two episodes of this one? I know I could have watched more if I’d forced myself to do so, and maybe I even should have, but at some point I’ve got to call it quits and move onto a show that I actually stand a better chance of enjoying. And frankly, Hibike! Euphonium started annoying me right off the bat. I’ll get the major positive out of the way first – this show looks great. Better than great; it looks fantastic, just like almost everything else Kyoto Animation produces. And in general, I don’t dislike KyoAni – Hyouka is still one of my favourite anime of all time, in fact, and I also enjoyed the heck out of Free! and even the first season of K-On! back in the day. No, my main problem is that I wanted a show about music, and what I got was a show about girls in short skirts with gratingly high-pitched voices who are (allegedly) interested in music. Now I have it on good report that Hibike! Euphonium eventually became more a show about music, and that it even had some great character development and compelling interpersonal relationships going on – but I’m going to have to take peoples’ word on that because honestly, what I saw of the characters annoyed the crap out of me. I wanted to look past this, just like I wanted to look past all those close-up thigh shots (good lord the camera just could not keep away from their legs in this show), but in the end I simply couldn’t. If that’s my loss, then so be it.

I have no idea what happens in this show’s second half because I gave up before I could get there. There were definitely a few things I liked – some very cool character designs, and a wonderfully unique Aztec-inspired setting, for starters – but holy crap was Rokka no Yuusha ever fond of awkwardly shoe-horned exposition. It sometimes seemed like literally half the episode was dedicated to nothing but this, broken up only by the sight of someone’s hefty cleavage as they dutifully explained things to other characters so that they (and the audience) might better understand the intricacies of what was going on… in excruciating detail. And no, the fanservice did not endear me to Rokka either, because a) I have little patience for fanservice of that nature anyway, and b) said cleavage shots were about as awkward as the exposition, so instead of being less distracted by one aspect of the series I was doubly distracted by two. And not in a good way. It struck me as a huge shame that Rokka’s lovely artwork and promising cultural backdrop took a distant second place to bad dialogue and ridiculous body armour, but I guess not every anime based on a light novel series is destined for greatness after all. 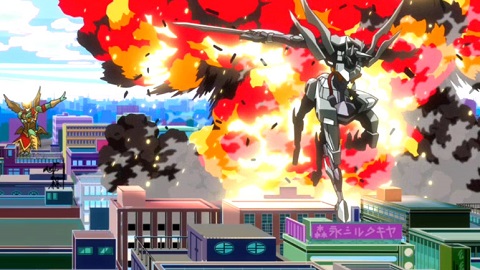 I think I can probably be forgiven for double-checking that my cereal had not in fact been liberally spiked with LSD after watching the premiere of Concrete Revolutio. That opening episode was a total clusterfuck, and it took me a while just to figure out if the show was going to be something I’d actually be able to enjoy or not. And to be fair, I didn’t not like it so much as just decide the series wasn’t really my thing. General wackiness doesn’t bother me, and certainly nobody could accuse Concrete Revolutio of lacking in energy or spoon-feeding its audience, but man this thing was erratic. There were masked superheroes and transforming aliens, magical-girls and mecha knight things, all interacting with each other amongst a barrage of loud colours and disordered time skips, and I don’t mind admitting it got to be too much even after I’d (sortof maybe possibly) gotten the hang of what was going on. To its credit, the show did start to feel more cohesive after a while, and by that point the art style was really growing on me as well. I think I might have stuck it out if the delivery had been better, or if there was someone I already trusted with this kind of crazy in the director’s seat like Imaishi Hiroyuki (Gurren Lagann, Kill la Kill) or Matsumoto Rie (Kyousougiga, Kekkai Sensen), but in the end I had neither the time nor the patience to keep going with it.

And finally, an honourable (?) mention to One Punch Man. I didn’t end up including it on the main list because I watched a grand total of only one episode, and because I didn’t think there was anything wrong with it at all – well, aside from finding it only mildly amusing at best.

Question of the post: Are there any shows released during 2015 that you didn’t like despite their general popularity? If not, how about shows you did like that very few others seemed to enjoy?