Is it just me, or is the amount of fanservice-laden anime about cutesy girls doing cutesy things particularly rampant this season? I don’t altogether mind – I welcome the chance to catch up on my somehow ever-increasing list of older titles – but it does certainly limit the number of winter shows on my watch-list.

Unusually, I’m also still following four anime from the previous season. One-cour titles of 11 to 13 episodes have been the common standard length for several years now, and so over recent times, I’ve generally had only one or sometimes two carry-over shows at most. It’s been a while since I’ve written anything about them, so I’ll also be including the ongoing Ronja, Yona, Parasyte, and Sailor Moon in this post (despite these all being far beyond ‘taste testing’ status at this point).

I get that this is a parody series and I’m therefore not supposed to treat it seriously, but… meh. The thing with parodies is that they have to be either be really smartly written, or at the very least outrageously over-the-top, for them to actually be funny. If not, they just end up as a bunch of scenes that poke fun at other shows or genres to no particular purpose or effect, and I think that’s exactly what’s happened here. Sure, I get all the Sailor Moon references, and there were a couple of lines that managed to wring a smile out of me, but as yet I see nothing clever or audacious enough to be entertaining in the long-term. 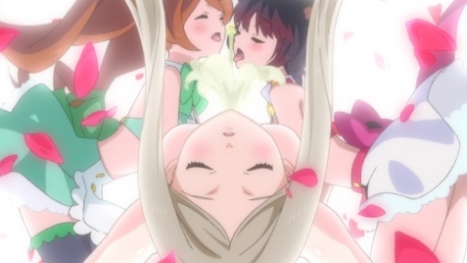 This show is about lesbians, bears, and lesbian-bears. All of them have perfect breasts, and there’s a lot of licking going on. Welcome back, Ikuhara Kunihiko. Okay, truth time: I’m really not a fan of Utena or Penguindrum. I have a lot of respect for Utena, and I love both the visuals and naturally the penguins of Penguindrum, but as overall shows go I’m not wild about either of them. At what point does heavy symbolism become pretentious and/or completely nonsensical? Where’s the line between genuine social commentary and metaphors that exist solely for the sake of being seen as trippy or ‘highbrow’ entertainment? Yuri Kuma Arashi may well end up falling on the wrong side of that line for me, and as yet I can’t even figure out if I’m amused or not. (But hey, at least the thing looks nice.)

Now this is a lot of fun. Overly dramatic, yes, and it also looks like it’s going to be a fairly formulaic and episodic kind of series that won’t be pulling any major plot twists; if you’re into understated titles that consistently surprise you or keep you guessing, you’re likely to be disappointed with Death Parade. On the other hand, if a gleefully dark atmosphere is what you’re after then you should definitely be keeping an eye on this one – from its wonderfully inappropriate opening sequence to its very distinctive visual style, Death Parade is playful, energetic, and creepy all at once. I don’t know that it’s going to be an especially clever series, but it certainly puts on a powerful performance, and there’s something to be said for an anime that gets right to the point and doesn’t pull its punches. I’m very much looking forward to seeing more of what it has to offer.

Yes, I still firmly believe that Durarara!! is vastly superior to Baccano! in every way. No, I’m not going to argue the point – I’m well aware it’s not the popular view, and I’m perfectly happy to let other people have their own opinion on the matter. In any case, this sequel is shaping up to be much the same in terms of style as the first series; same quirky cast with a few new faces to keep things fresh, same slightly twisted sense of humour, same air of lively and mischievous fun. The studio has passed from Brain’s Base to the brand new Shuka, but as the latter was apparently formed by a producer of the original Durarara!!, and because the director, writer, and even composer all remain unchanged, I doubt there’ll be any issues around consistency or quality. While the opening episode didn’t give too much away with regards to overarching plot, it did a good job of briefly reintroducing the setting and cast (it’s been five years, after all), and I’m very excited to see how these lives and events will once more intersect.

I’ll be brutally honest – at this point, I’m only hanging on because I’m curious to see what events are going to be covered in this show’s second half, which we’re coming up to now. I was originally quite happy with Crystal’s decision to cut out basically any and all filler, but I take that back; it’s resulted in little (if any) meaningful characterisation for or relationship development between nearly every member of the cast, and dramatically lessened any chance of emotional impact the series might once have had for me. I’m also flabbergasted at the lack of care that’s gone into much of the animation, which has likewise taken a turn for the worse. I’d have thought more time and effort would have been put into the production quality of such a well-known franchise, and I’m thoroughly disappointed that it so obviously has not. Shame on you, Crystal – you were meant for greater things than this.

I admit it, I’m torn between being charmed and being bored by this series. As I’ve said in my last two anime taste testing posts, Ronja isn’t a bad show by any means. Yes, the CGI does nothing for me but even that’s not really a concern for me anymore, and the solid writing more than makes up for it in any case. However, there’s also no looking past the fact that there’s precious little action of any kind whatsoever going on here. This is in part because the anime is based on a children’s book – it’s essentially a children’s show. Unfortunately, the aspects of Ronja that could easily make it a bit more exciting for older viewers, such as the actually pretty cool supernatural elements, are underplayed, and there’s only so much inactivity that I can take in one sitting. Still, I’m a bit sad that I’m apparently the only anime blogger on WordPress covering this title. Ronja might not be mind-blowingly fantastic, but it’s certainly worth more attention than its getting.

This is probably still the best carry-over title of the fall season, even if it’s not the one I’m enjoying the most. My enthusiasm has dulled a little thanks to the plot shifts, from pure body horror to covert government involvement and lashings of romance. I don’t have an inherent issue with either of these, but I do think they come at the cost of Kiseijuu’s previously tighter focus and better pacing. Migi is still by far the most compelling character of the series, and anything that takes away from his relationship with Shinichi and the pair’s uneasy coexistence means a dip in the show’s overall story as far as I’m concerned. That said, the writing is still solid enough, and having gotten this far I’m not going to give up now.

I know that the vast majority of anime bloggers don’t care for this show, but I don’t really care – I know genuinely good writing when I see it, and if other people want to brush Yona off as reverse-harem crap or ‘yaoi-bait’ (lol wat?), that’s their loss. While it’s true that Yona didn’t have the best opening couple of episodes, the series has since strengthened and held firm, and it’s wonderful to see the steady character development our leading lady has gotten. Yona’s still a long way from becoming the battle-confident leader that the opening credits suggest she’s eventually destined for, but she’s also no longer the pampered and helpless princess we started off with. Unlike many other viewers, I don’t think the romance is too much (in fact, I fail to see that much going on in this department at all), and the pacing has picked up considerably now that the team has grown in number. Of all the ongoing fall season titles, this is the one I now find the most enjoyable.

Question of the post: What are you general thoughts about the new anime season? Have I missed out on any must-see titles?