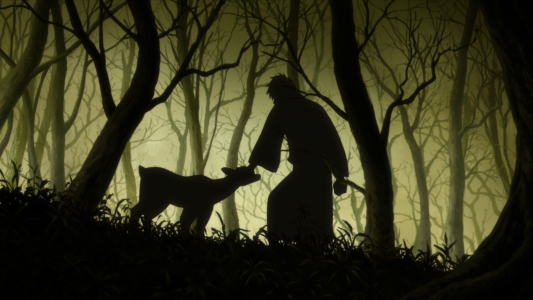 The halfway point for all but two of the spring anime shows I’m following is very nearly upon us, which must mean it’s about time for the usual first impressions follow-up post. I had already dropped a considerable number of titles last time around, and I’m sure it’ll surprise nobody to learn that some other titles have now joined them… although there’s been one surprise pick-up since then as well.

TD;LR, here are the shows I dropped after the first couple of episodes: Bokura wa Minna Kawaisou, Akuma no Riddle, Hitsugi no Chaika, Kiniro no Chord, Mekakucity Actors, Soredemo Sekai wa Utsukushii, No Game No Life, and Ping Pong. I didn’t talk about either of those last two in my original post, as I only gave them a first-episode trial last week. Neither particularly appealed (though I may well give Ping Pong a proper go when I have more time and/or patience for it), so I didn’t bother pursuing them further, and won’t be talking about them here.

Which leaves me with seven. As with last time, I’ll be starting from the bottom of the pile and working my way up to the good stuff. 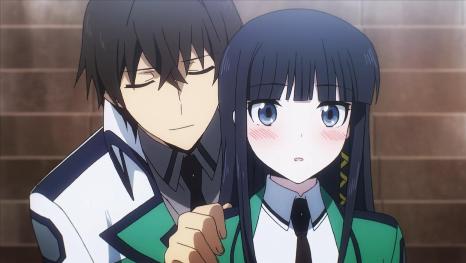 Just so we’re clear, I don’t give a damn about the light novels. I’m not trying to be disrespectful – it’s just that I genuinely don’t care. I haven’t read the books, I probably never will, and as far as this post is concerned, what matters is how the anime stands as an individual creation. And on that note, I can’t say that I’ve been overly impressed thus far. The visuals are still very striking; I really like the colour palette, and the animation (when the anime can be bothered to show it off) is extremely fluid. My main issue with this series as it currently stands is that my eyes are starting to glaze over despite these things. I’ve certainly seen way worse shows (I mean, the fact that there’s even a semblance of a plot here, and that it can be followed, already makes it far better than some other titles I could mention), but I’m on the verge of dropping this one nonetheless. A certain amount of exposition is almost always inevitable, but exactly how long am I expected to watch while people stand around and talk? Even the events at the end of episode 5 fail to liven things up sufficiently enough to rouse the show from its stupor. It’s a shame, because if it weren’t for the blandly clichéd school setting, I could see this alternative fantasy universe actually going somewhere. 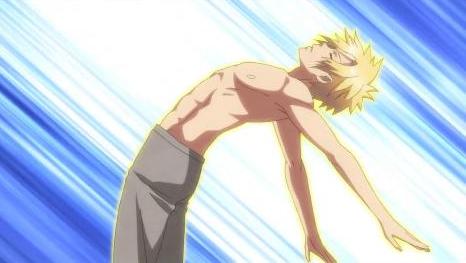 If only every episode were as fabulously ridiculous as that first one! Well, I’m still here, so clearly Kamigami no Asobi manages to continue being entertaining enough in its own way, but the sheer absurdity of those first twenty minutes hasn’t made a reappearance. This series is definitely one that works best when it’s being a blatantly stupid and over-the-top parody of itself, and to some extent that’s still what’s being showcased, but it really needs to ramp up the energy again if it wants to do itself justice. It’s funny, but no longer hilarious – although everything about it is still definitely very silly, so that’s a good sign. (Additional note: if I took a drink every time Thoth trapped Yui against a wall, I’d still be hung-over as we speak.) 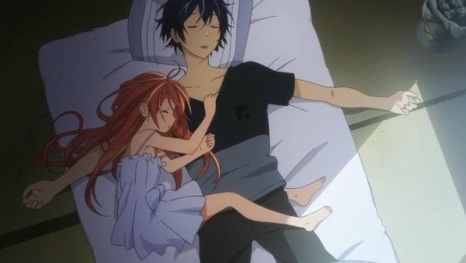 I’m finding myself running hot and cold with this show. The first episode felt average at best, the second episode was significantly better, and the next two took it down a notch or two again. I suppose I have no major issues, since Enju stopped annoying me pretty early on and nothing is yet screaming “plot hole!” at me – although I do think there’s still some important character development that needs to happen if Black Bullet is aiming to have any sort of emotional impact. I’ll almost certainly be watching this series right the way through, but it remains to be seen whether it’s going to be just another vaguely interesting but largely forgettable action piece, or whether it’ll turn into something with a bit more uniqueness and depth than that. Ah well, either way, at least the music’s good. Best OP and ED theme of all the light novel adaptations this season. 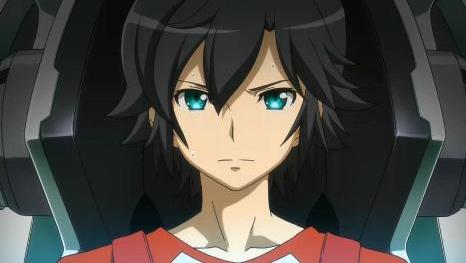 Captain Earth is a show that I think I want to like more than I currently actually do. It looks great, it sounds great (particularly the OP theme), and I can’t emphasise enough how much I like Daichi as a main protagonist, and for this type of series especially. He’s just so relentlessly and proactively optimistic that I can’t help but find myself charmed. On the other hand, the copious amounts of technobabble got old pretty quickly, and the sexist clichés got old even quicker. I made a note of this last time, but it’s still really bothering me; the ongoing trend of having female antagonists portrayed as sexually assertive and vivacious, while female protagonists are portrayed as sweetly naïve and/or sexually impotent, is something I find very problematic indeed – not to mention just plain annoying. We have Hana as the Good Girl, bedecked in a flowy, pure-white summer dress and equipped with as much bodily/sexual awareness as a toddler – the latter of which is of course played out just for laughs. Akari, as the Other but not Main Good Girl, tries to be sexy but fails miserably since she looks about 10 years old – again, played for the comedic value. And then we have Moco as the Evil Girl, who therefore has to flirt her way to her goals while stuffed into high-heel shoes, thigh-high stockings with suspenders, short shorts, and a tiny bustier to hold up her constantly jiggling melon-breasts. It’s hardly subtle stuff, and I credited the team behind Captain Earth with a bit more intelligence than that. Perhaps I was wrong to do so.

Sidonia no Kishi/Knights of Sidonia
Original score: none
Score: 7.5/10 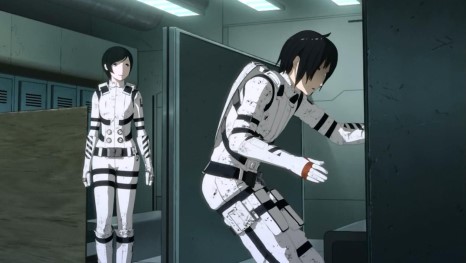 Wow. So, despite picking up this series on a whim, and despite not being overly fond of space-centric science fiction, there’s a lot about Sidonia no Kishi that I like. The character designs are cool, and I especially dig the uniforms. I appreciate that technobabble is kept fairly minimal, and I appreciate the general lack of fanservice even more. I love the OP theme (definitely the best single from angela I’ve heard in a while), although the ED is pretty good too. I also think that having these mecha that basically anyone can pilot, given enough skill and practice, rather than having only a few special ‘chosen ones’ with the inherent ability to do so, is an excellent move. One of the only things I’m not completely sold on is the CG; while I don’t have anything against the style, character movements look quite stiff and stilted, and can be distracting. I think that’s actually a relatively minor complaint though, and depending on how the plot progresses and what the pacing is like, I may well even bump the score up a bit later on. A lot of people seem to be comparing this show to Shingeki no Kyojin and I can sort of see why, although the similarities appear only skin-deep to me. And either way, Sidonia no Kishi is already proving itself to be the far stronger title. 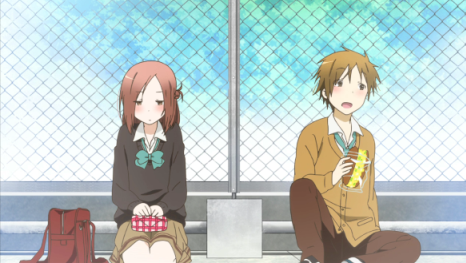 Now this is how to do a heart-warmingly sweet yet beautifully solid slice-of-life romance. It’s technically a drama, sure, but the cheap melodrama that characterises so many other romance titles is nowhere to be seen here – and by this point, I trust that Isshuukan Friends is smart enough to continue keeping those absurd misunderstandings, overly emotional knee-jerk reactions, and impassioned theatrics well out of the picture. It’s a simple anime with some simple messages, but it’s also reasonably powerful at what it does and quite lovely just the way it is. Better yet, it’s a romance that’s first and foremost about building and maintaining friendships rather than one about dating, sex, love triangles, or really anything else. Not that there’s anything intrinsically wrong or bad about any these other things, but it’s beyond refreshing to see a romance title whose primary focus is on none of them. I have one or two extremely minor complaints (which I’ll address if I end up writing up a full review once the anime is done), but this is still easily one of the best shows of the season. 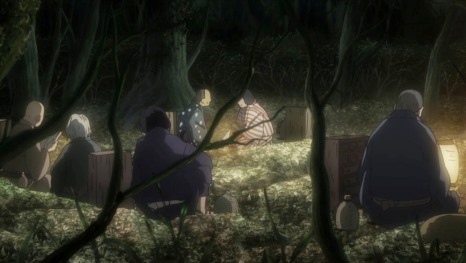 Honestly, nothing I say could properly express how good I feel this series is. I accept that Mushishi isn’t a show that absolutely everyone will or even should enjoy, but I also think its all-around excellence speaks for itself. As such, I really have nothing else to say – it is, quite simply, one of the finest anime of all time. As there are no particular changes of any kind as far as this sequel goes, and because it’s a purely episodic title, new viewers will have no problem diving straight in if they’re so inclined.

Question of the post: What are your top three picks of the spring anime season, and are they still the same titles as they were when the season had just started?