A while back on Otaku Lounge I wrote an article about my personal top five most hated female anime characters. In the interest of evening things out between the sexes a little, this article is a continuation of sorts, but with a slight difference – my top five male anime douchebags.

A quick note: I’m not interested in flat-out evil characters – obviously psychopathic serial killers and monster aliens out to destroy the world. For this reason I’ll be discounting, for example, most of the main villains of Dragon Ball Z, Sephiroth from Final Fantasy VII, Naruto’s Orochimaru, and Knives from Trigun. I’m also steering away from characters whose sole reason for being jerks lies in revenging loved ones, paying back terrible injustices, or attempting to right corrupt societies, i.e. Douchebags With a Cause such as Lelouch from Code Geass, Light from Death Note, and Speed Grapher’s Suitengu. Nope, this particular countdown is all about the characters who act like total assholes mostly just because they can.

17-year old Kurono starts off the countdown at the number five spot. The all-powerful magic 8 ball known as Gantz originally refers to him as ‘bitch’ and ‘loser’, and it’s not especially difficult to see why. Apathetic and self-centered in the extreme, Kurono’s many talents include repeatedly fantasising about seeing school teachers in lingerie, getting erections at really awkward times, and keeping emotionally unstable women as ‘pets’. While his character does evolve more in the manga as well as in the live-action adaptation, Kurono remains a selfish and rather perverted character throughout much of the anime. Gantz creator Oku Hiroya reportedly designed his character with audience identification in mind, but if this is the case, I already don’t want to know anything more about the manga readers. 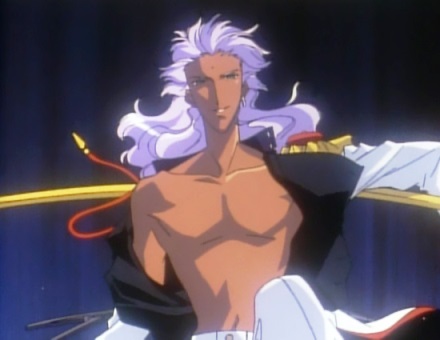 So many asshats, so little time. It’s hard to know where to start with Utena, since there are numerous characters who display such obvious douchebag tendencies. There’s student council president Touga, resident playboy extraordinaire who also enjoys playing head games with pretty much everyone, but especially our titular character. Then there’s vice-president Saionji, who’s prone to random outbursts of anger and has a nasty habit of bitch-slapping young women. Top series douchebag award should probably go to academy chairman Akio though, mostly because he’s even more egotistical than Saionji and his sexual conquests include (but are clearly not limited to) the following characters: Utena herself, Touga, his own fiancée Kanae, Kanae’s mother, and of course his own sister Anthy. What a guy. 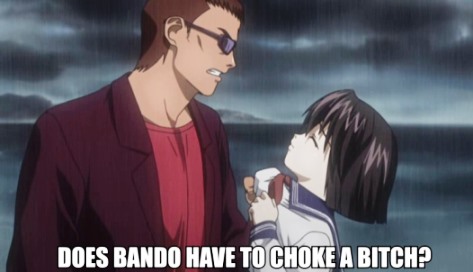 You know you’re got yourself a winner when you see a soldier backhand a secretary for ‘sneaking up on him’ when she brings him a cup of tea. More than a tad trigger-happy, Bando’s particular brand of honour is more or less overridden by his homicidal inclinations. I’d probably give the man props for getting right back into the fray after having his left arm horrendously broken, his right arm lopped off at the elbow, and his eyes gouged out if I didn’t know it was only because of his compulsive need to indulge in any kind of violence whatsoever. One could argue that Bando’s character is vindicated when he finally dies in Mayu’s arms after his own remaining one is ripped off and his body cut in half at the waist, but I’m not sure that really excuses the countless people he no doubt mocked, maimed and murdered in the past just because he felt like it. Good times.

Huzzah for genocidal maniacs. It would be simple to discount Vegeta from this list by reason of insanity (and some might claim he falls into the (Douchebag With a Cause category), but he’s just too coldly logical for me to write him off as a complete psychopath or revenge fighter that easily. Vegeta’s ridiculously inflated sense of superiority is matched only by the fact that his hobbies include blowing up whole planets for shits and giggles. And his own partner for being too weak to defeat the main character. And defenceless alien villages in order to obtain a certain golden sphere. Etc. etc. Incredibly, he marries Bulma and has two kids later on in the series, but never quite manages to lose his distorted ego… despite not once managing to defeat Goku, or any of the main antagonists of the show either for that matter. His new status as family man also doesn’t seem to prevent him from being jerks to absolutely everyone, including his own wife and son. Great stuff.

Proving that his douchebaggery can indeed stand the test of time, the number one spot has to go to this guy. Gendo will do anything – and I do mean absolutely anything – to achieve his goals, and in the anime dictionary it will be his picture you’ll see next to ‘God complex’. The phrase ‘distant father figure’ doesn’t even begin to touch upon Gendo’s relationship (or rather lack thereof) with Shinji, and by the time his past sexual relationship with Akage Naoki and his current one with Naoki’s own daughter Ritsuko was revealed, I had ceased to become surprised at any of his actions… although the nature of his relationship with Rei could be viewed as more than a little disturbing, given how much she physically resembles Gendo’s dead wife. Ironically, while in the Rebuild films other characters seem much softened compared to their original television series personas – Rei is less icily unattached, Asuka is less abusively hostile, even Shinji isn’t quite as socially inept – Gendo is just as much of an asshole as he always was. (On that note, I only just discovered the Facebook page Gendo Ikari For President: You Can (Not) Dislike the other day. Do give it a look if you’re as easily amused as I apparently am.)