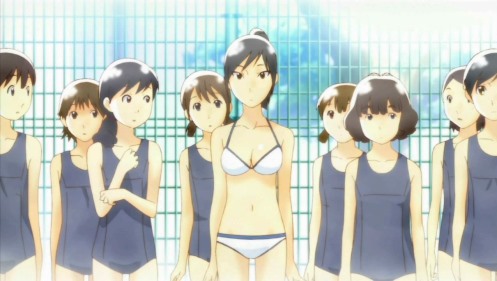 An effeminate boy who wants to be a girl, a masculine girl who wants to be a boy, and a student who comes to her first day at a new school dressed in a boy’s uniform just because. On its own it comes across a bit like the beginning of a joke that begins with three people walking into a bar and ends with a dirty punch-line. With the word ‘anime’ added to the mix, it probably sounds like a recipe for a series involving a lot of fanservice and/or pornography and not much else, since the number of anime titles dealing with gender identity and cross-dressing in a realistic and non-comedic way are extremely few and far between. Hourou Musuko (Wandering Son) does exactly that.

Like any slice-of-life title, the plot of Hourou Musuko consists largely of what anyone might expect – a group of young teens attempting to carve out a niche for themselves amongst their families and peers while discovering the joys of navigating through puberty and school life. What makes this series stand out from the countless other anime doing exactly the same thing are the characters themselves. Shuichi, a cute but unassuming male who begins to cross-dress with the encouragement of his friends is nonetheless still attracted to girls and worries about the physical changes his body will go through. Yoshino, a tall and more emotionally charged girl prefers to dress and act like a boy but doesn’t like to draw attention to herself, and refrains from cross-dressing unless she travels outside of her home city. Then there are personalities like the outgoing and impulsive Chizuru, who occasionally dresses as a boy as a gesture of independence but seems perfectly happy just the way she is.

In short, everyone in this show is unique in his or her own way, yet also comes across as far more down to earth than many, if not the majority, of those presented in other slice-of-life titles. While Hourou Musuko does have its humorous moments, it avoids straying into primarily comedic fare as with other anime involving cross-dressing as a main plot point such as I My Me! Strawberry Eggs, Princess Princess, and Ouran High School Host Club. At the same time, Hourou Musuko also miraculously steers clear of any real melodrama, which some of the more serious slice-of-life anime like Honey and Clover and AnoHana never quite manage to achieve. 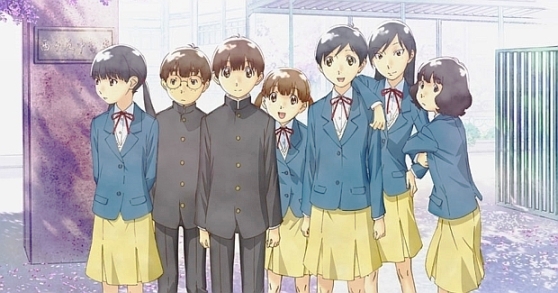 In terms of its technical merits there is little about Hourou Musuko for me to criticise. The artwork is reminiscent of watercolour; soft and almost fuzzy around the edges, which lends the series a very gentle tone despite the serious nature of its themes. You won’t find any unnatural hair colours or enormous eye size here, and in that sense it’s perhaps vaguely akin to the work we’ve seen come out from Studio Ghibli. The drawback of this is that character recognition based purely on design is more difficult than some may be used to. It certainly suits the tenor of the anime, but as the cast is relatively large it may take some viewers a while to pin everyone down.

Likewise, the voice acting is well above standard. For those who make a point of checking out the talent before they watch, there are some very accomplished names among the cast including Chiba Saeko (Kare Kano, Nana, Nodame Cantabile), Horie Yui (Fruits Basket, Loveless, Toradora), Fujiwara Keiji (Full Metal Alchemist, Eureka Seven, Ao no Exorcist), and of course Mizuki Nana (who should need no introduction unless you’ve been solely watching anime released prior to the late 90s).

Hourou Musuko is not for everyone. You’re out of luck if you have a specific penchant toward slice-of-life titles that rely mainly on comedy or moe as their main selling point (i.e. Azumanga Daioh, Lucky Star, K-On!), and if you’re expecting to see flawless bishounen or pseudo-lesbian fanservice then you’ll be quickly disappointed. However, for those anime fans after something touching and heartfelt but just a little off the beaten track, I strongly suggest giving Hourou Musuko a try. At the very least, you’ll finally be watching something that doesn’t stoop to using gender reversal as an oversexed plot device.

Question of the post: Are there any other anime titles you can think of that present cross-dressing or transgender identity as a main theme in a serious light, or can you only think of comedy titles?